"An international team of astronomers has answered a long standing question about the enigmatic jets emitted by black holes, in research published today in prestigious journal Nature. Jets are narrow beams of matter spat out at high speed from near a central object, like a black hole.

"Although they have been observed for decades, we're still not sure what they are made of, or what powers them," ESO astronomer Dr María Díaz Trigo, lead author of the study, said.

The team studied the radio waves and X-rays emitted by a small black hole a few times the mass of the Sun. The black hole in question was known to be active, but the team's radio observations did not show any jets, and the X-ray spectrum didn't reveal anything unusual.

However, a few weeks later, the team took another look and this time saw radio emissions corresponding to the sudden appearance of these jets, and even more interestingly, lines had appeared in the X-ray spectrum – the tell-tale signature of ordinary atoms – around the black hole.

"Intriguingly, we found the lines were not where they should be, but rather were shifted significantly," Dr James Miller Jones from the Curtin University node of the International Centre for Radio Astronomy Research (ICRAR), who led the radio observations, said." 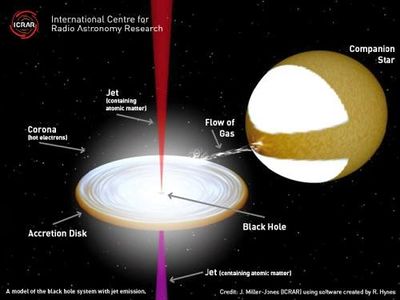 Image: This is a model of the black hole system with the jets that have been found to contain atomic matter. Credit: J. Miller-Jones (ICRAR) using software created by R. Hynes.