Difference between revisions of "Circles"

While creating a resource page, please click here for a resource creation checklist.

The following is a background literature for teachers. It summarises the things to be known to a teacher to teach this topic more effectively . This literature is meant to be a ready reference for the teacher to develop the concepts, inculcate necessary skills, and impart knowledge in Geometry - Circles from Class 6 to Class 10.

The first step is to understand how to define circles and related terms using geometric vocabulary. The next step is to understand what is Pi. That it is a constant and that for any circle the ratio of the circumference by the diameter is always a constant value Pi. The interesting properties of Pi – an irrational number can also be discussed here in the basic form. Ability for the child to do simple area and perimeter calculations. Next the learner should understand that the circle is a 2 dimensional plane figure and how to visualise solid 3-dimensional figures. What are the solid shapes that have a circle as a part of them. Mensuration – more complex area measurements which include circular shapes. Surface Area and Volume measurement of sold shapes such as cylinder, sphere and cone. Understand the properties of the circles by proving theorems deductively. Also acquire the skills of deductive proofs, understand that all the properties can be deduced from the axioms. Understand the relationship between lines and circles – secant and tangent

This is a resource file created by Suchetha, Mathematics teacher, GJC Thyamangondlu

This is a resource file created by Suchetha, Mathematics teacher, GJC Thyamangondl

When I tell people that circles are the mother of all inventions, the first thing they ask is, “circles are inventions?”

There is no way to be certain, but anthropologists generally agree that the circle was created long before recorded history. It is quite likely that it was drawn by a stick in the sand. With the sun being a constant in early man’s existence and the source of all life, it is quite likely that the first circle represented the sun.

Through the years man’s understanding of the circle has evolved substantially with Euclidean geometry being its crowning point of technological understanding. (Having said that, I assure you this blog is not going to be about mathematics or boring scientific equations.)

What we will say that is without the rudimentary understanding of circles, the world would not be anything like it is today. Without circles, there would be no wheel, which is man’s crowning achievement dating back to the Neolithic Age (circa 9500 BC).

The three other great achievements are the ability to make fire, the agriculture of crops, and the domestication of animals. While the circle didn’t have any direct bearing on these advancements, the understanding of circles certainly contributed to their proliferation and expansion.

Besides the wheel, pulleys, gears, ball bearings and a thousand other items we take for granted wouldn’t exist. And of course we would never have the pleasure of driving a car, riding a Ferris wheel, or watching the moon landing on our television set.

If you look through any old patent claim, you will most likely find the repeated use of circles, spheres, curves, arches, etc. They are an intrinsic component in the invention of almost everything that we see around us.

I had a microbiologist challenge me that his field didn’t have much use for circles. Not knowing anything about microbiology, I asked him what was the shape of the lens in his microscope.

The circle is the most primitive and rudimentary of all human inventions, and at the same time, the most dynamic. It is the cornerstone in the foundation of science and technology. It is the basic tool of all engineers and designers. It is used by the greatest artists and architects in the history of mankind.

And it doesn’t exist except in our mental construct. It is a symbol, not a thing. We talk about it in every language on earth. It is written about in millions of textbooks and all over the Internet, and yet we cannot put it in a wheel barrel. It doesn’t exist in a three dimensional world or even a two dimensional world. It is merely a representation.

Immanuel Kant’s famous phrase “ding an sich” applies to the circle. A circle is not a “thing-in-itself.” It is a semantic fabrication that exists only in our imagination. As Alfred Korzybski, the father of General Semantics, would say, it is “the map, not the territory.”

But here we are getting off on a philosophical tangent that might be subject to a future blog entry. For now let’s just say that circles are everything and they are nothing. They don’t exist in reality and yet they are the basis of all that mankind has brought into existence. That is why I think the circle is so fantastic.

Source: http://circlesonly.wordpress.com/tag/inventions/
Summary : The circle is the most primitive and rudimentary of all human inventions, and at the same time, the most dynamic. It is the cornerstone in the foundation of science and technology. It is the basic tool of all engineers and designers. It is used by the greatest artists and architects in the history of mankind. Without a circular shape the wheel, pulleys, gears, ball bearings and a thousand other items we take for granted wouldn’t exist. And of course we would never have the pleasure of driving a car, riding a giant wheel, or watching the moon landing on our television set.
If you look through any old patent claim, you will most likely find the repeated use of circles, spheres, curves, arches, etc. circles are everything and they are nothing. They don’t exist in reality and yet they are the basis of all that mankind has brought into existence. That is why a circle is so fantastic.

A discussion on “Life without circular shaped figures.”

Discussion based activity to relate and assimilate circular shapes seen in our surroundings.

Circle as a shape

A circle is the set of all points in the plane that are a fixed distance from a fixed point.

Is circle a Polygon ? - A debate

A polygon when increased in number of sides tends to form a circle is shown with this interesting activity.

Drawing concentric circles, with this hands on activity circle as a shape and variations in it is explored.

Equal circles are circles with same radius is a concepts that is introduced in this activity.

Equal parts in a circle

Dividing a circle in to parts and exploring to divide it into equal parts is show in this activity.

Use the GeoGebra file [[2]] and illustrate and verify that the ratio is true for different radius by moving the radius slider and using the table below to compute the values. 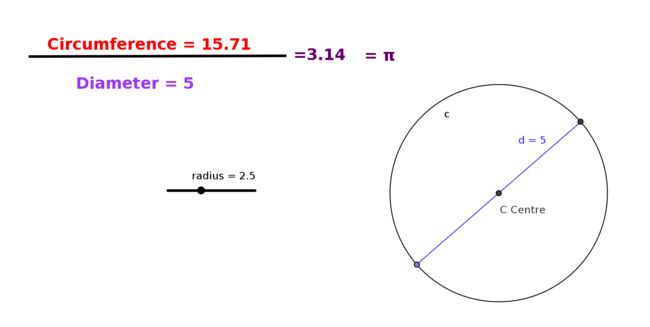 Perimeter of a circle

To apply the use of calculating the perimeter of a circle in a real life example .

Draw the following sketch and do the calculations for the evaluation questions. The sketch shows the two main dimensions of a standard 400 metres running track. 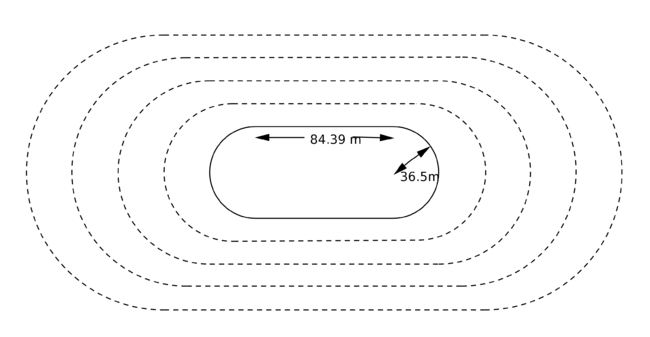 compare with that in Lane 1 ? Is there any advantage in being in Lane 1?

Centre of a circle

All points on a circle are at fixed distance from a point, which is the center of a circle.

Radius and diameter of a circle

Marking radius and diameter of a circle and understand their relation.

Circumference of a circle

Measuring circumference to understand it as the perimeter of the shape.

Partitioning a circle into two halves to form semicircles by drawing diameter.

Interior and exterior of a circle

Basic elements of a circle

Chord of a circle

Arc of a circle

The part of the circumference within the two points in either directions are called its arcs.

Arcs and Sector of a circle

Slice of a circle enclosed between any two radii is called a sector.Semicircle and quadrant are special types of sectors.

A chord is the interval joining two distinct points on a circle. This activity investigates formation of chord and compares with the diameter of the circle.

Secant and tangent of a circle

A tangent is a line touching a circle in one point. A secant is the line through two distinct points on a circle.

A chord is a straight line joining 2 points on the circumference of a circle.Chords within a circle can be related in many ways.

The theorems that involve chords of a circle are :

Chord length and distance for centre of the circle

For a chord the distance from the centre is the perpendicular distance of the chord such that it passes through the centre.

The longest chord passes through the centre of the circle

Investigating the diameter is the longest chord of a circle.

Congruent chords are equidistant from the centre of a circle

In the same circle or in circles of equal radius:

• Equal chords are equidistant from the centre.

• Conversely, chords that are equidistant from the centre are equal.

Angles in a circle subtended by a chord

The angle made at the centre of a circle by the radii at the end points of a chord is called the central angle or angle subtended by a chord at the centre.

Relation between the angles of a cyclic quadrilateral are explored with this hand on activity.

A line which touches a circle at exactly one point is called a tangent line and the point where it touches the circle is called the point of contact.

Tangents from a point outside the circle

The lengths of two tangents from an external point are equal.

The tangents drawn from an external point to a circle are equally inclined to the line joining the point to the centre of the circle.

A line which intersects the circle in two distinct points is called a secant line (usually referred to as a secant).

Common tangents are lines or segments that are tangent to moret han one circle at the same time.

The centres of the circles lie on the same side of the common tangent.(dct) 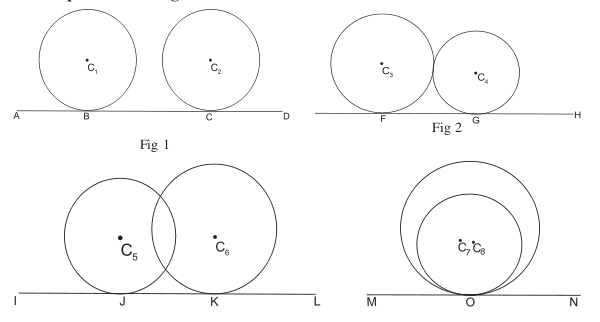 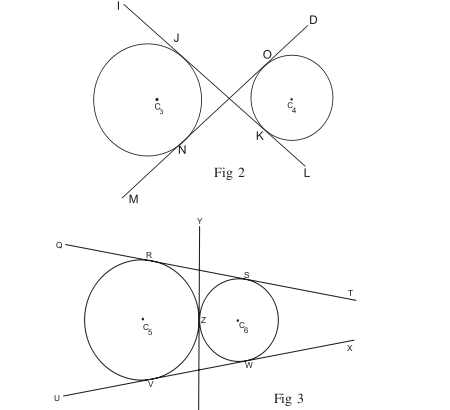 1.How many direct common tangents can be drawn to 2 intersecting circles and 2 separate circles?

2.Can you draw tct to 2 intersecting circles?

3. How many umber of tangents to a circle which are parallel to a secant ?

4. How many number of tangents that can be drawn through a point which is inside the circle ?

Proofs and verification of properties of tangents

The correct use of reasoning is at the core of mathematics, especially in constructing proofs. Many statements, especially in geometry. Recall that a proof is made up of several mathematical statements, each of which is logically deduced from a previous statement in the proof, or from a theorem proved earlier, or an axiom, or the hypotheses. The main tool, we use in constructing a proof, is the process of deductive reasoning.

We start the study of this chapter in deductive reasoning using several examples.

we can verify the theorems by practical construction. And also by using GeoGebra tool.

Tangents to a circles:

For any two different circles, there are five possibilities regarding their common tangents: 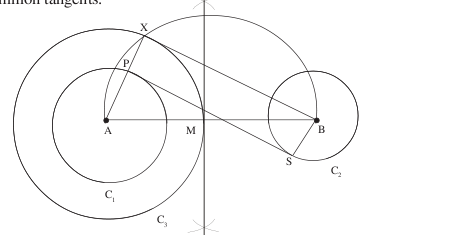 Acquire knowledge about the

The direct common tangents to two circles meet on the line of centres and divide it externally in the ratio of the radii.

The transverse common tangents also meet on the line of centres and divide it internally in the ratio of the radii.

Click here for some interesting videos on constructions of circles.

The major portion of the contributions for this topic are from Radha N, GHS Begur and Roopa N GHS Nelavagilu .