The following is a background literature for teachers. It summarises the things to be known to a teacher to teach this topic more effectively . This literature is meant to be a ready reference for the teacher to develop the concepts, inculcate necessary skills, and impart knowledge in Triangles from Class 6 to Class 10. The idea is to know that a triangle is one of the basic shapes of geometry and how a triangle is formed. To understand the type of Triangles based on their sides and angles. To understand how a exterior angle is formed and the meaning of interior angles of a triangle. To know when two triangles become congruent to each other by understanding the postulates. Meaning of similarity and theorems based on similarity of triangles. Costruction of triangles and to find the Area of the Triangle. 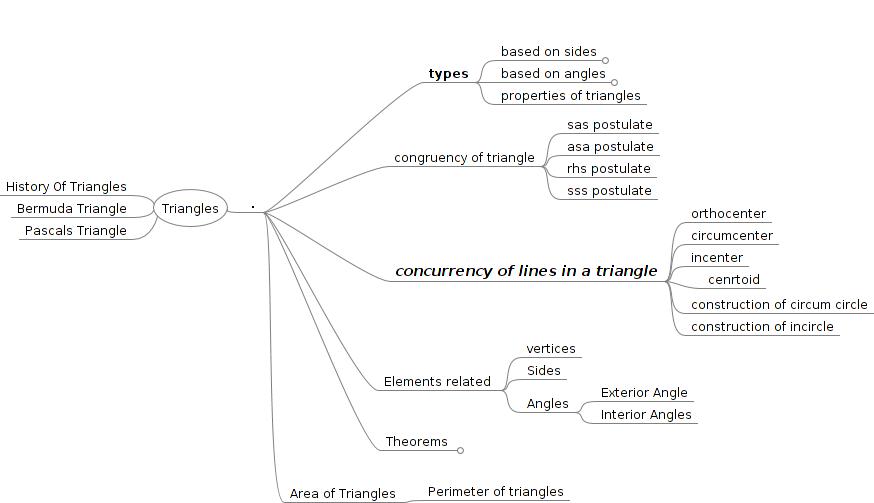 Mark three non-collinear point P, Q and R on a paper. Join these pints in allpossible ways. The segments are PQ, QR and RP. A simple close curve formed by these three segments is called a triangle. It is named in one of the following ways.

A triangle is one of the basic shapes of geometry: a polygon with three corners or vertices and three sides or edges which are line segments.

In fact, it is the polygon with the least number of sides.

A triangle PQR consists of all the points on the line segment PQ,QR and RP.

Vertices of a Triangle

The point of intersection of the sides of a triangle is known as its vertex. In figure, the three vertices are P, Q and R. In a triangle, an angle is formed at thevertex. Since it has three vertices, so three angles are formed. The word triangle =tri + angle ‘tri’ means three. So, triangle means closed figure of straight lines having three angles.

Identify and name the triangles

Identify and name the triangles in the following Figure.

Triangles can be classified in two groups:

Triangles differentiated on the basis of their sides.

A triangle with all sides equal to one another is called an equilateral triangle.

A triangle with a pair of equal sides is called an isosceles triangle.

A triangle in which all the sides are of different lengths and no two sides are equal, the triangle is called a scalene triangle.

Triangles differentiated on the basis of their angles.

A triangle whose all angles are acute is called an acute-angled triangle or simply an acute triangle.

A right triangle has one angle 90°

Since the total degrees in any triangle is 180°, an obtuse triangle can only have one angle that measures more than 90°.

Interior angles of a triangle

The interior angles are those on the inside of the triangle.

Exterior Angles of a triangle

An exterior angle is formed by extending any side of the triangle.

There are many types of triangle centers. Below are four of the most common.

In the case of an equilateral triangle, all four of the above centers occur at the same point.

The Incenter of a triangle

Try this Drag the orange dots on each vertex to reshape the triangle. Note the way the three angle bisectors always meet at the incenter.

Centroid of a Triangle

From Latin: centrum - "center", and Greek: -oid -"like" The point where the three medians of the triangle intersect. The 'center of gravity' of the triangle One of a triangle's points of concurrency. Try this Drag the orange dots at A,B or C and note where the centroid is for various triangle shapes.

Refer to the figure . Imagine you have a triangular metal plate, and try and balance it on a point - say a pencil tip. Once you have found the point at which it will balance, that is the centroid.

The centroid of a triangle is the point through which all the mass of a triangular plate seems to act. Also known as its 'center of gravity' , 'center of mass' , or barycenter.

A fascinating fact is that the centroid is the point where the triangle's medians intersect. See medians of a triangle for more information. In the diagram above, the medians of the triangle are shown as dotted blue lines.

Put another way, the centroid divides each median into two segments whose lengths are in the ratio 2:1, with the longest one nearest the vertex. These lengths are shown on the one of the medians in the figure at the top of the page so you can verify this property for yourself.

From Greek: orthos - "straight, true, correct, regular" The point where the three altitudes of a triangle intersect. One of a triangle's points of concurrency.

Try this Drag the orange dots on any vertex to reshape the triangle. Notice the location of the orthocenter.

The altitude of a triangle (in the sense it used here) is a line which passes through a vertex of the triangle and is perpendicular to the opposite side. There are therefore three altitudes possible, one from each vertex. See Altitude definition.

It turns out that all three altitudes always intersect at the same point - the so-called orthocenter of the triangle.

Be able to identify triangles.

Identify the types of triangles.

[Activity evaluation - What should the teacher watch for when you do the activity; based on what they know change]

Pythagoras' Theorem was discovered by Pythagoras, a Greek mathematician and philosopher who lived between approximately 569 BC and 500 BC.

In any right-angled triangle, the square of the hypotenuse is equal to the sum of the squares of the other two sides. That is:

A three-dimensional object can be described by three measurements - length, width and height. 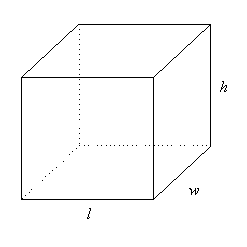 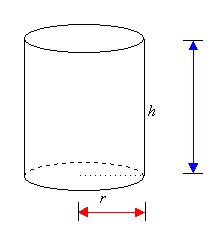 the box or cylinder. 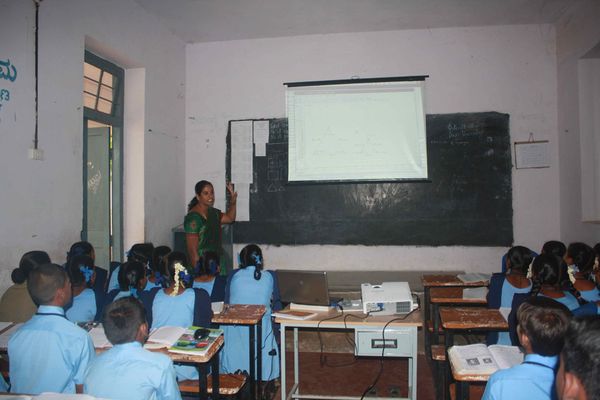