As part of our intensive work on the Teachers' Community of Learning, an ICT week was planned at GHS Mallupura, Nanjangud Taluk.The following were the objectives of this initiative:

The detailed concept note with the proposed activities and objectives is at Annexure. Rakesh, Seema and Ranjani organized and conducted the event. The following is the summary of the event.

The day 1 started with an introduction to all the teachers. We met the Head Master and all the teachers and Ranjani introduced the ITfC team and took them through the plan of work. It was decided that we would work with Class 9 on Day 1 - on map making. The class of 87 children had already been divided into 5 groups. 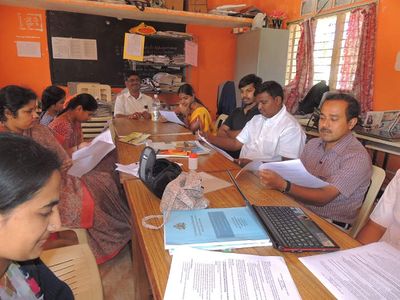 Rajesh (the maths teacher) explained the project of mapping. He explained why we need to have a scale for a map, why there are standards for measurements and we got into a discussion on how to map the various areas. We decided that we would map the school, the roads around and the village and route to the Mallupura sugar factory. The children discussed what possible methods could be used for mapping the compound, the school area and the distances around the village. For the school compound, we decided on ropes and inch tapes and for the outside area, it was decided to measure with cycle wheel rotations! And checked with the motorbike. The students were in 5 groups - three groups of girls were to map the school compound including all the details and the buildings. Two groups of boys were to go for the mapping outside of the school. The boys spent a lot of exciting time trying to measure the wheel rotation. They also attached a sound counter that would help them determine when a wheel rotation was complete. Two wheel rotations were measured to be approximately 2 metres and the students were to go measuring the village. 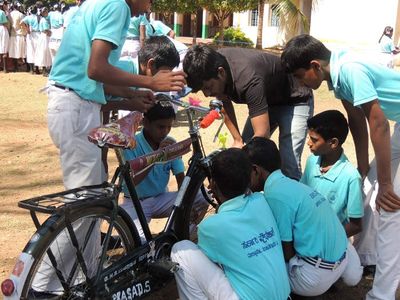 After the initial preparation, Rajesh, Ranjani and Rakesh had to join a meeting with the Head Master, Nanjangud BRP and the nodal officer of NVEQF. The drawing teacher who was trained was also part of the discussions. The timetable and method of selection of the students for the programme were discussed.

It was close about 2.45 pm when the two groups went outside the school. The three groups of girls were already done with some of the measurements and we left them with some instructions to make an initial sketch with the help of the drawing teacher. Ranjani went with the group around the village and Rakesh went with the group to the factory. Seema helped the three groups who had been working inside the school. We ended the day's work at 430 pm. During the first day, not all the teachers participated. The CBZ teacher and Rajesh were the only ones with us with the drawing teacher providing intermittent support.

Rakesh, Seema and Ranjani reached the school at 9 am in the morning. The day started with a bit of excitement as we left the office at 640 am in the morning. After two bus rides and a breakfast at Nanjangud (with Seema declaring that the Nanjangud idli was better than Mysore idlis - there were only 5 to a plate!), we reached the school a little before 9.

We left the students with instructions on how to finish the map. They needed help with measuring and the idea of scale, etc. However seeing the google map gave them an idea of the map. They were able and keen to fill in details.

On the second day, we also had a meeting of all the teachers after lunch and requested their participation. We also made a plan for which teachers would start planning their ICT integration for their subjects. All the teachers went with the Class 8 students, 90 of them on their photo essay of the village. One group photographed the school and 4 other groups went around the village photographing. We decided to do the documentation the next day. 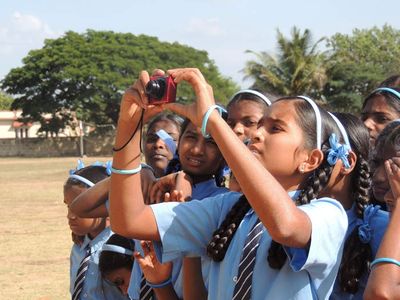 During the second day, Rakesh also fixed the thin clients in the school. 9 machines were working and we tested. The school does not have an internet.

The day ended on an equally exciting note as we missed the bus. The teachers dropped us to Nanjangud on their bikes and then we got into the bus for Mysore. All of us were completely tired and slept dreamlessly on the bus!

Rakesh had to leave for a family emergency and Seema and Ranjani went to the school. During the previous evening Ranjani had already selected the pictures from each of the teachers that had to be documented and this was given to the anchoring teachers. Each teacher worked with their group and started to document their stories. They did this on our net books as all the children could not be accommodated in the lab and there was some documentation work being done on the server on Windows. The photo documentation took the entire morning. In parallel, the students from Class 9 were completing their map. While a few of them (about 10) were completing the map, the other students from class 9 were revising their lessons. 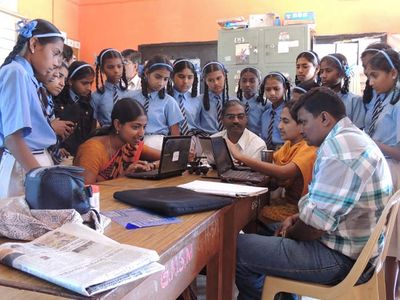 After lunch we had an extended discussion with the teachers on how and what methods can be used for ICT integration. Initially the teachers all were saying nothing can be done because there were no facilities. After some discussions, when I pointed out that they are essentially saying there is no solution, we focused on what the teachers could do for skill building.

We agreed on the following: 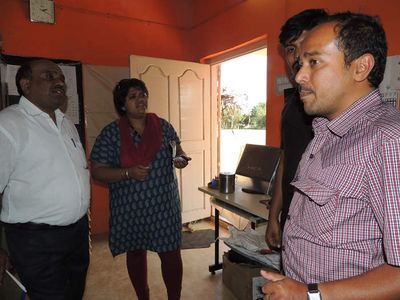 Our learnings and conclusions